The rights and duties of motorists regarding the speed of their vehicles is largely defined in Md. Transp. Code Ann. §21-801.1-speeding cause accident.

The Maryland legislature has established maximum speed limits as follows:

The basic rule regulating the proper speed at which motorists may drive is contained in Transp. §21-801. Rather than simply mandate that a motorist may not exceed the posted speed limit, the statute provides that “a person may not drive a vehicle on a highway at a speed that, with regard to the actual and potential dangers existing, is more than that which is reasonable and prudent under the conditions.” It is additionally provided that “[a]t all times, the driver . . . shall control the speed of the vehicle as necessary to avoid colliding with any person or any vehicle or other conveyance that, in compliance with legal requirements and the duty of all persons to use due care, is on or entering the highway.”

Thus, even if a motorist is proceeding within the posted speed limit, he or she may be found negligent for exceeding a safe speed, particularly where conditions or hazards are present requiring the reduction of speed. If a driver’s view is obstructed by smoke, fog, rain, snow, sleet, or other atmospheric conditions, he or she must exercise care to avoid injury including reducing speed. A motorist can be negligent driving 20 miles below the speed limit through drifting snow that completely obliterated his view, motorist faced with the glare of headlights of an approaching car.

Md. TRANSPORTATION Code Ann. § 21-804 Minimum speed regulation (a) Slow speed impeding traffic prohibited. — Unless reduced speed is necessary for the safe operation of the vehicle or otherwise is in compliance with law, a person may not willfully drive a motor vehicle at such a slow speed as to impede the normal and reasonable movement of traffic.

The Maryland Motor Vehicle Code prohibits a person from driving a vehicle in a race or speed contest on any highway or on any private property that is used by the public in genera1. Md. Transp. Code Ann. §21-1116.

It is well settled in Maryland that the racing of motor vehicles on a public highway is negligence and that both vehicles will be found liable even if only one of the vehicles struck the innocent car. 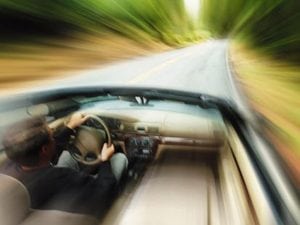 Speeding alone is not enough to prove the speeding driver is at fault. Often a potential client will present a case where they were making a left- hand turn in front of a vehicle and a collision occurs. The client will then suggest the accident is the fault of the other driver because they were speeding. This defense is unlikely to work because of one of the following reasons:

Proving speeding can often be difficult in an accident case. There are several ways to prove speed.

If a passenger is in a vehicle that the passenger knows is speeding, and fails to object or ask to get out of the vehicle, the passenger may be found to be contributorily negligent. It would be unreasonable to hold that a passenger in an automobile, who knew that it was being driven at a speed so excessive as to endanger the lives of persons in the lawful use of the public highways of the State as well as the occupants of the machine, and who so far acquiesced in, approved, and participated in the conduct of the driver, that he made no protest or objection to it when he could, was guilty of negligence directly contributing to the injury complained of.

If he knew that the speed at which the car was being driven was so great as to imperil the lives and safety of its occupants, it was his plain duty to have warned the driver and to have protested against the speed of the machine, and if he failed to perform that duty when it was within his power to perform it, and the accident which he knew might happen actually did happen, then he is considered equally negligent and will not be able to sue the driver..

For more info on car accidents in Maryland CLICK HERE.