Normally, the car that runs a red light is at fault. Generally, when a car enters an intersection on a green light and there involved in an accident with another car that had a red light in the action will be considered to be the fault of the car that had the red light. However, there are many exceptions to this particular rule.

Maryland law requires the driver of the vehicle to obey the traffic control devices including: red, green and yellow lights.

The state of Maryland has three statutes that cover the responsibilities of drivers at intersections controlled by traffic lights. The driver that violates these rules is likely to be found at fault. These laws control rights of way in the following situations:

Md. TRANSPORTATION Code Ann. § 21-201 Obedience to and required traffic control devices (a) Obedience required.(1) … the driver of any vehicle, unless otherwise directed by a police officer, shall obey the instructions of any traffic control device applicable to the vehicle and placed in accordance with the Maryland Vehicle Law. 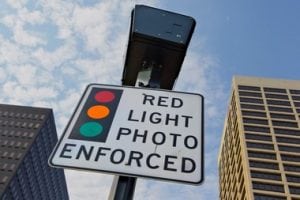 When drivers turn comes to make a left-hand turn at the left turn arrow the light he enters on a green or yellow arrow and then the turn arrow color changes either shortly before or shortly after the car enters the intersection from green to yellow and eventually to the red. Often the driver is not able to complete his left turn before the light turns to green for oncoming traffic. 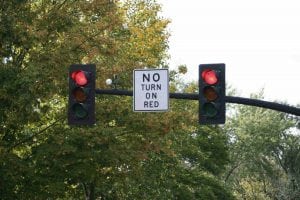 The last scenario involves a vehicle that is stopped in the middle of an intersection in order to make a left-hand turn but there is a steady stream of traffic in the other direction preventing him from making the left turn despite the fact that his light is green or yellow. Because there is no gap in the traffic, the vehicle that wants to make a left-hand turn is unable to do so until the traffic light turns to red.