Carpal tunnel syndrome symptoms usually start gradually. The first symptoms often include numbness or tingling in your thumb, index and middle fingers that comes and goes.

Many people “shake out” their hands to try to relieve their symptoms. The numb feeling may become constant over time.

Weakness. You may experience weakness in your hand and a tendency to drop objects. This may be due to the numbness in your hand or weakness of the thumb’s pinching muscles, which are also controlled by the median nerve.

Carpal tunnel elicits numbness in the distribution of the median nerve, nocturnal symptoms, thenar muscle weakness/atrophy, positive Tinel’s sign at the carpal tunnel, and abnormal sensory testing such as two-point discrimination Electrodiagnostic testing (electromyography and nerve conduction velocity) can objectively verify the median nerve dysfunction. Normal nerve conduction studies, however, do not exclude the diagnosis of CTS. Clinical assessment by history taking and physical examination can support a diagnosis of CTS. If clinical suspicion of CTS is high, treatment should be initiated despite normal electrodiagnostic testing.

Although widely used, the presence of a positive Phalen test, Tinel sign, Flick sign, or upper limb nerve test alone is not sufficient for diagnosis. 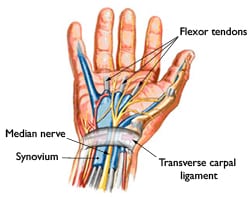 Carpal Tunnel syndrome can often be mistaken for other medical conditions.

Treatments for carpal tunnel syndrome include:

Generally accepted treatments include: physical therapy, steroids either orally or injected locally, splinting, and surgical release of the carpal ligament. Change in activity may include avoiding activities that worsen symptoms.