Issues include the following:

What are the symptoms of a cervical (neck)herniated disc:

Millions of people suffer from neck, shoulder, and arm pain. While there are numerous conditions that can result in this type of pain, a common cause is a herniated disk in the neck. Discs, which act as shock absorbers for the spine, are located in between each of the vertebrae in the spine. Each disc contains a tire-like outer band that surrounds a gel-like substance

A herniation occurs when the outer band of the disc breaks or cracks and the gel-like substance from the inside of the disc leaks out, placing pressure on the spinal canal or nerve roots. In addition, the nucleus releases a chemical that can cause irritation to the surrounding nerves causing inflammation and pain.

Most Cervical Disc Herniations occur as a result of sudden stress. This occurs during movements resulting in sudden flexion, extension, or twisting of the neck, such as during a fall or auto accident. Sometimes herniations occur gradually, over weeks or months. However, there are risk factors that can contribute to the chances of a disc herniation, including:

A herniated disc in the neck can cause severe pain and symptoms that disrupt a person’s quality of life. However, most symptomatic herniated discs end up resolving on their own. Some studies indicate that cervical radiculopathy from a herniated disc can to start feeling better within 4 to 6 weeks, although some symptoms may last up to 6 months, and more than 80% of cases are symptom-free within 2 to 3 years.

What is the treatment for neck injuries?

Non-Operative Treatment
The good news is that most cases of cervical disc herniation do not require surgery! There are a number of non-surgical treatments that can help relieve symptoms. A herniated disc cannot be repaired or healed back to a normal state, so the primary goal of treatment is to minimize pain until the inflammatory proteins dry out and symptoms subside. Typically, nonsurgical treatment options will be tried for at least 6 to 12 weeks. If nonsurgical treatments are not providing relief and neurological deficits persist or worsen, such as numbness or weakness in the arm, surgery may be considered as a last option. 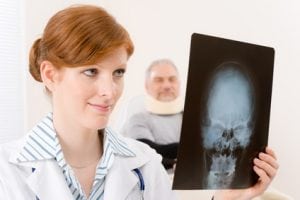 Surgical treatment
If non-operative measures do not work, surgery may be recommended. An anterior (from the front) cervical discectomy is the most common surgical procedure to treat damaged cervical discs. The goal of this procedure is to relieve pressure on the nerve roots or on the spinal cord by removing all or part of the damaged disc.

During the surgery, the soft tissues of the neck are separated to expose the offending disc. The disc is removed, to decompress the spinal cord or nerve roots. If necessary, the space left by the removed disc will be filled with a bone graft – a small piece of bone usually taken from the patient’s hip. The bone graft is used to join or fuse the vertebrae together. This is called a fusion. In some cases, some instrumentation (such as plates or screws) may be used to help promote fusion and to add stability to the spine.

During posterior cervical surgery, a portion of the bone covering the nerve may also need to be removed. This procedure is called a laminectomy.